Juni 5, 2016/A PEEP BEHIND THE SCENES, FUN & ACTIVITIES/Admin Wordpress 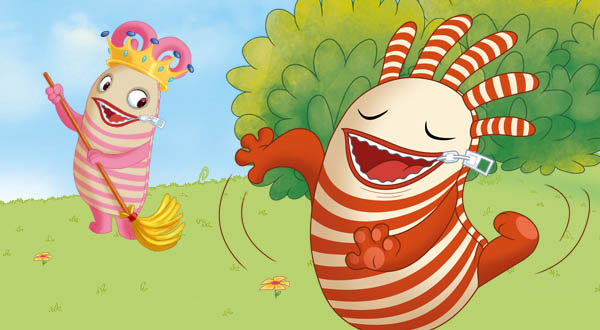 WORRY EATERS certainly don’t like to be bossed around. But someone has to decide when to turn off the street lamps at night or where to start the next race with the fantastic pedal-powered vehicles our Worry Eaters love so much. In DADA-LAND these decisions are made by the King-of-the-day! But it is neither an easy job for the WORRY EATERS nor for the crown because the crown has to suffer the whole year round!

On one occasion, for example, Flint dropped the crown into the ocean during one of his wild sea battles. Another time, the crown got stuck on Flamm’s head and Bill almost had to saw it off! But fortunately, smart Wanda had the great idea of Flamm just doing a headstand and the crown came off by itself.  A further incident happened when Frula was Queen-of-the-day: in the middle of cooking one of her famous soups, the crown fell into the soup pot! Fortunately, Frula managed to save the crown before it melted. So, you see – being a crown isn’t that easy!

If the crown could talk, it would definitely choose one particular Worry Eater to be the permanent Queen-of-the-day: Polli! Polli loves things to be neat, sparkling clean and shiny.   When it’s Polli’s turn to be queen, the first thing she does is to breathe on the crown and then polish it with a duster until it’s so shiny, she can see her own reflection. “Alright!“ Polli proudly proclaims, “We are now ready to reign!“

When Polli visits Saggo to ask him for some advice about what could be a good idea to regulate that day, he is pleasantly surprised to see her. “To what do I owe the honor of this visit to my humble abode?” Saggo winks at her with a charming smile. “Humble? Dreadful is the term I would use!” says Polli, looking around. The kitchen sink is full of dirty dishes, the floor is filthy and the lamp hanging from the ceiling is covered in dust. “Huh!“ Saggo protests, “My house looks just like everyone else’s around here!” „Exactly!“ Polli exclaims, “But that’s about to change!”

In front of the palace, Polli climbs onto the throne and declares the motto of the day:

On hearing this, the other Worry Eaters start to mutter with discontent. But when Polli promises to bake some of their favorite goodies in return, they all roll up their sleeves and get down to work.

And so, in the evening, when all their homes are sparkling clean, Polli serves her “subjects” the most delicious muffins, cakes and biscuits and the band “Without-a-Worry” tunes in with some of their smashing hits. What a perfect end to a wonderful day!